In Walker County, Ala., work is under way on the longwall expansion project of the Alabama Mining Academy at Bevill State Community College (BSCC).

The existing mining building already has a working section that simulates coal extraction at the school’s Sumiton campus, with the expansion designed to provide new, inexperienced miners a better understanding of longwall coal mining in the state.

“The longwall will be set up prior to the walls and roof being built,” said Ken Russell, BSCC director of workforce solutions and mine technology education. “It’s like a jigsaw puzzle, with a lot of pieces that have to fit. Logistics and timing will be the key for a smooth transition.”

The Alabama Mining Academy was established in 1985 to provide assistance to the industry in developing and implementing effective mine health and safety programs. The training program also provides rescue and recovery services for Alabama’s smaller mines, by providing two fully equipped and well trained mine rescue teams. BSCC is the only college in the state that offers mine technology curriculum. 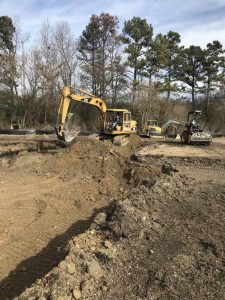 In Alabama, the larger coal operators mine the Blue Creek coal seam. This coal is primarily used for steel making, and is, for the most part, not used in power plants or as steam coal. Met coal is much more environmentally friendly, and commands a higher sales price per ton. Obviously, the larger operators employ a lot of people and provide high wages and benefits that are good for the region and state economies. The longwall expansion will add the missing pieces for these new miners to have a basic knowledge of the mining cycle. It offers a continuous miner section and a longwall section with all the production and safety aspects of both.”

A groundbreaking ceremony for the expansion was held in December 2020.

“Work is progressing on the project from the construction side, and I’m in the midst of working with our industry partners gathering equipment, guidance and professional knowledge to have it all ready when the contractor tells me it’s time for the longwall to be set up,” said Russell, who’s extremely pleased to see workers moving forward with the undertaking.

“The majority of my 30-year mining career was spent in safety at a large underground operation in Alabama. I’ve been at Bevill for the past 14 years over mine training. There’s nothing more rewarding than knowing that I’ve had a small part ensuring that miners are not only trained on how to do daily tasks or job procedures, but they will also learn the health and safety aspects each job brings, as well as the challenges they will face in an underground environment every working day.”

According to Randy Stults, BSCC director of facilities, operations and project management, constructing the mock longwall takes a great deal of planning and coordination.

“There are multiple long wall shield equipment pieces, each weighing approximately 25 tons. These pieces of equipment must be set in place before the final construction can continue.”

Stults noted that the longwall expansion calls for multiple electrical/hydraulic pieces of equipment used to support the mine roof, while coal is being extracted from the coal seam and loaded onto a conveyor system that eventually comes to the surface.

“One of the biggest challenges is probably going to be setting the owner-bought equipment in regards to the logistics of getting in and out of the site. Setting the equipment and building the structure itself are among the major tasks that remain. We have completed the building pad construction, and are now moving into the concrete phase of work.”

Stults said, for the most part, the elements have not been a problem.

“Weather has cooperated thus far; however, there have been some rain days that resulted in slight shifts of scheduling.” 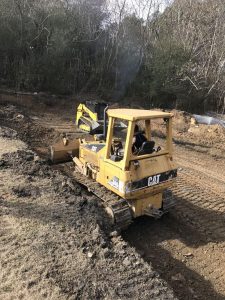 A variety of equipment is being used on the project, which received nearly $1 million dollars in funding as part of the state legislature’s education budget.

Construction includes an inside classroom, made from block and hollow core slabs.

“The major concern with this project, from this point on, is laying the blocks in the correct way to accept the hollow core slabs,” Stults said.

In addition, the concrete topping for the slope of the roof has a vapor lock add mixture that creates a moisture barrier for the project. For workers, it will make for an interesting pour.

As for the condition of the site before work began, said Stults, “The site was vegetative in state. There were unsuitable soils below grade, and the contractor addressed all these issues based upon the geotechnical report that we had performed.

“Prep work involved stripping topsoil and undercut and backfilling with good suitable fill dirt material. This is a standard procedure in site work construction, not uncommon, and most construction requires it to be able to build to suit the project needs. A total of 5,000 cubic yards of fill will be moved on the project.”

“They have been on site for roughly three weeks. They stripped the topsoil, undercut the building pad 10 feet out around the perimeter and backfilled the undercut areas with borrow material. They came up eight-inch lifts to meet the compaction requirements. Once they were to grade, they completed their scope of work. They are currently installing the road so the owner-furnished equipment can be installed.”

For Russell and the rest of the team, the completed project can’t come soon enough.

“The people most excited for this expansion would be the met coal operators, including Warrior Met Coal, Peabody Energy, Shoal Creek Mine, Crimson Coal and Oak Grove Mine. They know the value resulting from the project, and without their support, it would not have been possible. Senator Greg Reed and Chancellor Jimmy Baker turned the wheels to make it all happen, and for that I will be forever grateful.”

Russell added, “It has been my desire to make the mining program at Bevill not only one of the best, but the best mine training facility in the country. The longwall expansion will move Bevill closer to that reality.”