Mining is the extraction of valuable minerals or other geological materials from the Earth, usually from an ore body, lode, vein, seam, reef or placer deposit. These deposits form a mineralized commodity that is of economic interest to the miner.

Ores recovered by mining include metals, coal, oil shale, gemstones, limestone, chalk, dimension stone, rock salt, potash, gravel, and clay. Mining is required to obtain any material that cannot be grown through agricultural processes, or feasibly created artificially in a laboratory or factory. Mining in a wider sense includes extraction of any non-renewable resource such as petroleum, natural gas, or even water.

Modern mining processes involve prospecting for ore bodies, analysis of the profit potential of a proposed mine, extraction of the desired materials, and final reclamation of the land after the mine is closed.

Nearly 50 percent of all U.S. electricity is generated from coal and uranium and nearly every manufactured good contains some mineral component. 63% of gold is used in jewelry, 21% in coins, 15% in industrial uses including electronics and 1% in dental. The average smartphone contains over 60 elements in the screen, camera, electronics, battery, sound and vibration systems.

On average, every American uses approximately 3.4 tons of coal and nearly 40,000 pounds of newly mined materials each year. A newborn infant will need a lifetime supply of: 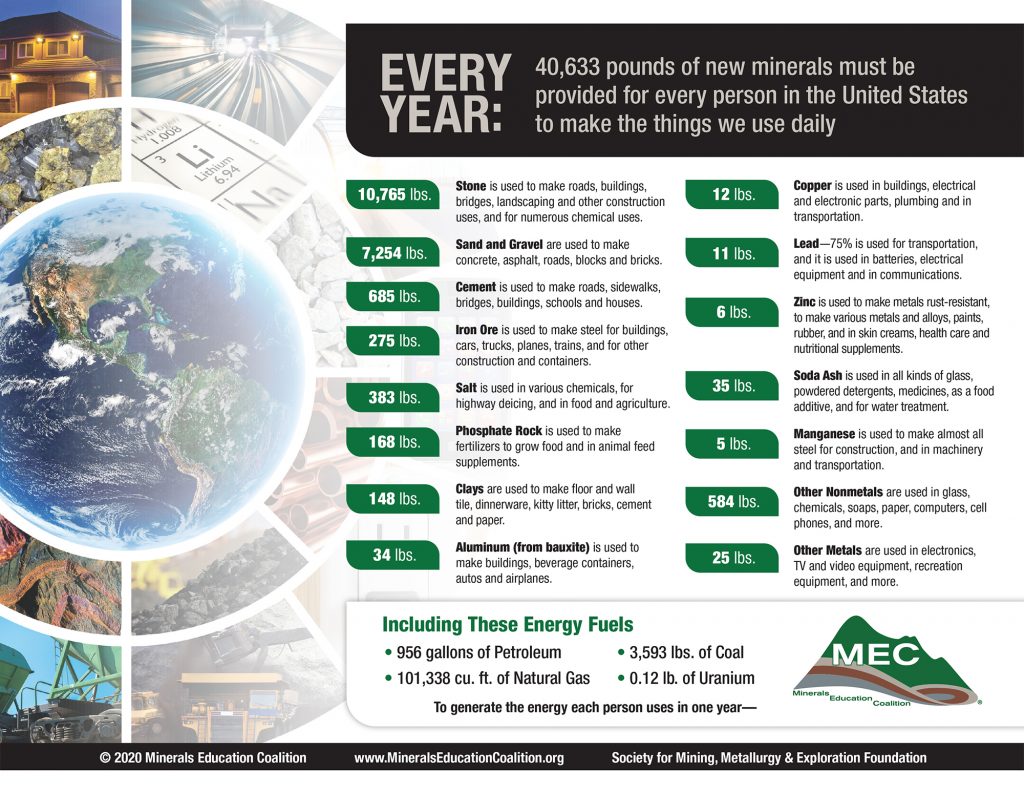 Coal is an organically derived material classified as a carbonaceous sedimentary rock. Most coal was formed 280 to 345 million years ago as trees, ferns and other plants decomposed and were buried under prehistoric seas and swamps. The decayed plant material compacted into a solid through millions of years of chemical changes under pressure and heat. In addition to these organic (carbon based) materials, coal also contains other elements such as hydrogen, oxygen and nitrogen. Its rich carbon content gives coal most of its energy content. When coal is burned in the presence of air or oxygen, heat energy is released.

Coal is the largest and most widespread fossil fuel resource. It accounts for 23 percent of the world’s known energy sources.

Met coal worldwide is less abundant and more valuable than thermal coal. Alabama’s met coal contains very low sulfur and has strong coking properties, making it ideally suited for steel makers. Around 70% of global steel production is dependent on met coal. Most of the met coal mined in Alabama is exported to steel makers in Europe, Asia, and South America via the Port of Mobile.

Metallurgical coal, also known as coking coal, is used to produce coke, an integral component used in steelmaking. Steel is essential for building the critical infrastructure and the products that make our quality of life possible.

Metallurgical coal is a high-grade component in the chemical reactions that transform iron into steel. The steel industry uses coal coke to smelt iron ore into iron to make steel. The high temperatures created by burning coal coke givesteel its strength and flexibility. Every ton of steel produced requires approximately 0.6 tons of metallurgical coal.

Nearly every industry including energy, construction, transportation and equipment manufacturing requires steel, which is necessary for building infrastructure such as railways, bridges, tunnels, skyscrapers, wind turbines, and power plants. By 2050, steel use is projected to be 1.5 times higher than present levels in order to meet the needs of our growing population.

Around 1 billion tons of metallurgical coal are used in global steel production, which accounts for 15 percent of total coal consumption worldwide. Global steel demand continues to surge to record highs and is expected to increase 20 percent by 2030. The U.S. has more than 175
metallurgical coal mines, directly employing more than 13,000 individuals. U.S. coking coal plants consumed 18.3 million short tons of coal in 2018.

U.S. coal exports have increased significantly over the past two years, jumping more than 60 percent year-over-year in 2017, and another 19 percent in 2018.

Thermal coal, also called steam coal, is a more abundant form of coal that is used to generate electricity and an industrial heating source.